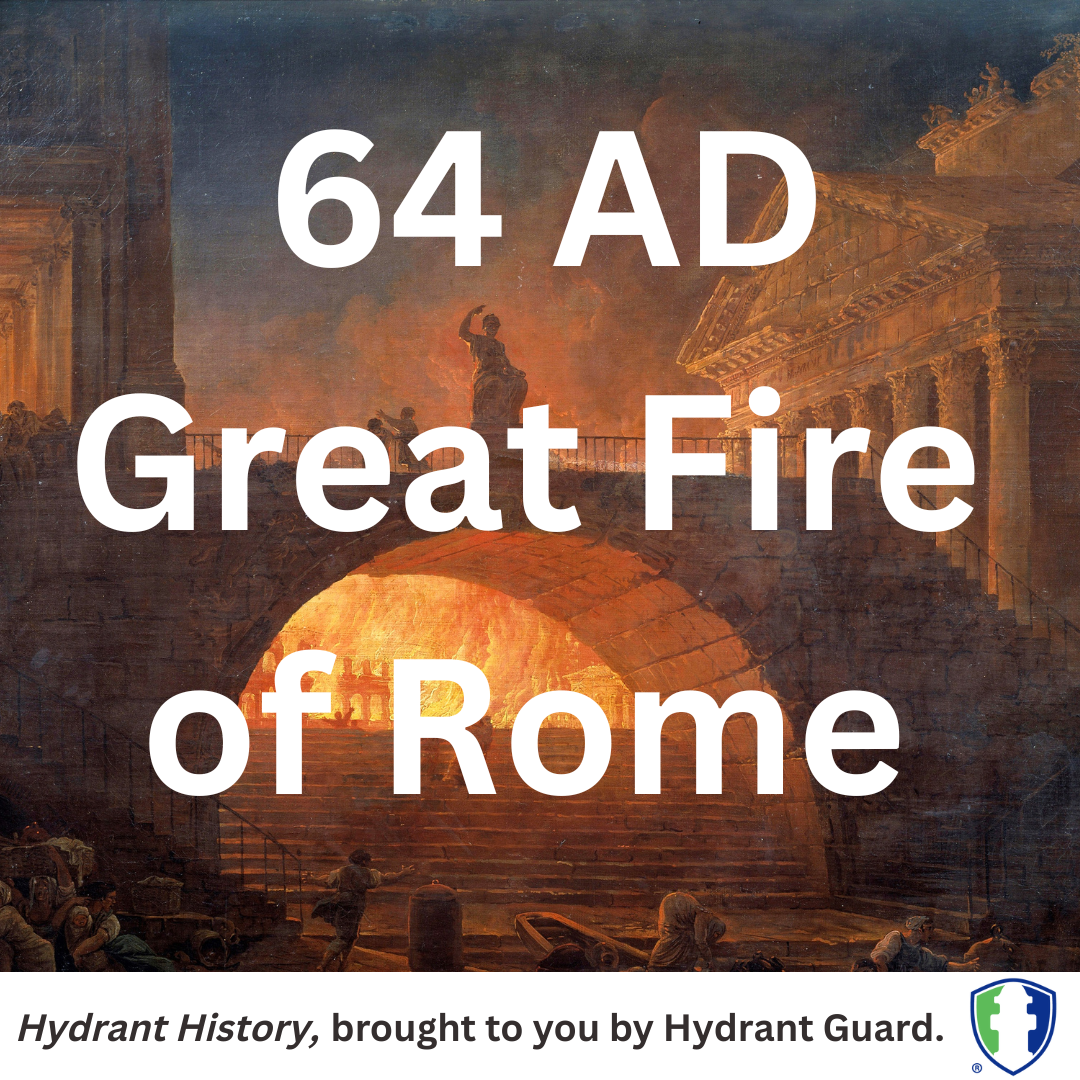 A Glimpse into Firefighting Tactics in the Roman Empire

One of the first large fires of recorded history gives an example of how dramatically an urban landscape can change after demolition by flames. Like the California of today, Rome had been suffering years of drought and was vulnerable to fires at the time. The Great Fire of Rome of 64 AD burned down two thirds of the city and provided a blank slate for reconstruction. Fortunately for Rome and the world at large, planners rebuilt the city with an improved design to prevent future fires from getting out of control.

At the time of the Great Fire, Rome had been deploying active fire brigades for decades. Augustus Caesar had founded the Vigiles Urbani around the turn of the millennium to patrol the Capital for unsupervised fires. The typical Vigiles firefighting kit was more like a cache of weapons: buckets, hooks, picks, axes and even catapults. Horses pulled wagons that carried double action pumps submerged in small, towable cisterns.

Although some of the Vigiles specialized in maintaining a place-perfect memory of the city’s water sources, pumps were primitive and harnessing water was a serious mechanical challenge. As a result, most firefighting was ruthlessly destructive for any unfortunate property owner. The goal was to stem the spread of fire, and private property was subordinate to civic safety. A typical firefight involved tearing down buildings or barraging them with arrows and stones to create firebreaks. Draping flames in vast blankets, doused in a sort of elementary flame retardant, was also a common maneuver.

The city that emerged after the Great Fire looked purposeful: large avenues, stone masses of buildings, public fountains, baths, and urban reservoirs. Neighborhoods were rebuilt with firebreaks between structures. The aqueducts and the clay piping that flushed Rome with water were given larger above-ground networks. The Romans didn’t yet have dedicated fire hydrants, but their advances in infrastructure laid the groundwork for more modern firefighting strategies.

Another city’s famous fire disaster led to even more inventions that still define modern firefighting. In our next post in the “Hydrant History” series, we’ll jump into the Great Fire of London.

This website uses cookies to improve your experience while you navigate through the website. Out of these cookies, the cookies that are categorized as necessary are stored on your browser as they are essential for the working of basic functionalities of the website. We also use third-party cookies that help us analyze and understand how you use this website. These cookies will be stored in your browser only with your consent. You also have the option to opt-out of these cookies. But opting out of some of these cookies may have an effect on your browsing experience.
Necessary Always Enabled
Necessary cookies are absolutely essential for the website to function properly. This category only includes cookies that ensures basic functionalities and security features of the website. These cookies do not store any personal information.
Non-necessary
Any cookies that may not be particularly necessary for the website to function and is used specifically to collect user personal data via analytics, ads, other embedded contents are termed as non-necessary cookies. It is mandatory to procure user consent prior to running these cookies on your website.
SAVE & ACCEPT